Hi, I like books! This is what I think about them. 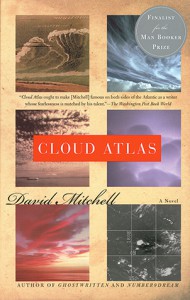 My actual score is closer to a 3.5. Sorry for the lazy review, school is intense and I don't really know how to organize my feelings on this one.

Cloud Atlas is one of those books that you either love or hate, which is why it's unusual that I feel mostly neutral about it. It was an entertaining, clever book; the unusual narrative style kept the book interesting and varied. The one largest complaint I have is that I didn't "get" the main connection between all the stories. It was evident when they were referenced within each other, but I feel that if I hadn't read a little bit about the book beforehand, I wouldn't have understood the overall theme of reincarnation and souls passing through the stories. Most critics of the book fail to get this theme entirely, so maybe it helped that I came in with some prior knowledge.

To those who want to read this book but are wary of all the negative reviews, I offer this advice: just read the book. Enjoy it. I liked all of the stories, and they're so different in plot, narrative style, and setting that you're bound to enjoy at least one of them. The stories that didn't hold my attention in the first half became some of my favorites in the second half. The point is, don't read this book for some big, philosophical revelation. If you look close enough, you can gain some insight from this book, but at the end of the day it's best to approach it as a bunch of short stories compiled into a novel.

To address a few more common issues: the middle chapter. As you may know, the six stories of Cloud Atlas are divided in half and told in order, then in reverse order: 1 2 3 4 5 6 5 4 3 2 1. So at the very middle, you get the entire story in one whopping section. Many people consider the middle story, "Sloosha's Crossin'," impossible to get through. It's told in post-apocalyptic Hawaii by a boy who narrates in a futuristic English dialect, which some readers have a hard time understanding. Honestly, it's not that difficult. There are quite a bit of new contractions and a few new words that the reader has to discern, but the chapter about futuristic Korea has just as much ambiguous dialogue. It's Mitchell's style, I've noticed, to throw the reader into unfamiliar situations in which they must read along and use context clues to piece together what's going on in the setting. Nothing is handed to the reader on a silver platter, in "Sloosha's Crossin'" or any other writing of his. Besides, following "Sloosha" are some of the best chapters in the whole book, so don't call it quits right there.

This review has mostly been a collection of my musings about the popular opinion, so lastly, I'll include a short summary of the chapters. Beware of spoilers within.
* The Pacific Journal of Adam Ewing - the journal of a man travelling through English pacific colonies in the early 1800s. It's a slow start, and the nineteenth century dialogue is hard to understand (I tried recording all the words I didn't know in this part, and stopped on page 9 after writing down over 100 words). Probably my least favorite chapter in the book, but if you can get through this, the rest will be easy peasy.
* Letters from Zedelghem - one of my absolute favorites, start to finish. This is the story of Robert Frobisher, a bitter, disadvantaged composer who travels to prewar Belgium to visit a famous musician whose health is declining, in the hopes that he will be taken in as an aide.
* Half Lives: the First Luisa Rey Mystery - this is one that would make a good standalone novel. A young journalist finds evidence of a corporation's sinister cover-ups and puts her life in danger when she tries to expose them.
* The Ghastly Ordeal of Timothy Cavendish - a successful editor goes through a series of misfortunes when the thuggish nephews of his best-selling author start to hustle him for money. This is one of the stories that I didn't enjoy at first, but the ending in the second part is brilliant. I can't wait to see this in the movie!
* An Orison of Sonmi~451 - set in dystopian futuristic Korea where corporations rule everything, a fast-food serving clone tells the story of her "ascension" to humanity. This was probably my favorite story through and through. I would love to see a whole novel inspired by this story.
* Sloosha's Crossin' an' Everythin' After - the infamous middle part. Not as gripping, story-wise, as some of the others. A boy named Zachry lives on post-apocalyptic Hawaii in a village of farmers and sheepherders, and must deal with several clashes with other, more nefarious tribes.
Tweet